A game for your Tandy Color Computer 3 and RGB monitor.

It is the year 2525 and the worldwide intrusive surveillance net OMNISTAR encircles the globe with satellites in orbit around 20 of the world's most prominent cities.

You are a promising hacker, recruited by the resistance, who are hoping you will be able to take down the OMNISTAR where others have failed. It is rumored there is a secret message waiting for the one who succeeds.

A member of the resistance has been assigned to each node to monitor your progress and help whenever they can.

You do know a few commands: LOAD <program> will load a program into your workspace. SAVE <program> will save it into the node directory. And EXEC <program> will execute it so that you can try to figure out what each program does.

The command TIME will display how long you have been logged in.

GO <node> is the command that accesses one of the nodes adjacent to your current node.

The goal is to damage the OMNISTAR so that SYSTEM STATUS is 0%.

But if you are attacked such that USER STATUS goes to 0%, game over!

Each of the nodes and programs also has a percentage, and once that percentage goes to zero, they will not operate.

You will see automated processes moving from node to node, in service to the OMNISTAR. They are MILBOTs, MEDBOTS, and SPYBOTs... what do each of these do? The names may provide a clue. And they have percentages too, so can you knock those down?

Hints: Use the up-arrow to repeat a command. All commands, program names and node names can be abbreviated to two letters. Some programs don't need to be EXECuted but instead have an effect merely by being present in your workspace.

PS: Any similarity to the name of a certain large corporation is purely coincidental.

In order to download this game you must purchase it at or above the minimum price of $15 USD. You will get access to the following files: 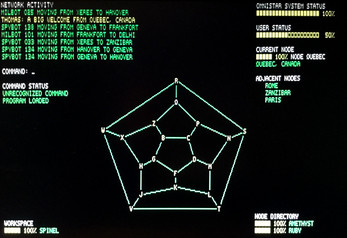